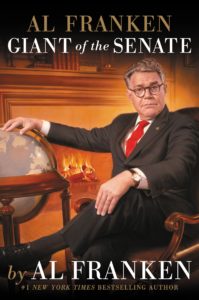 In Conversation with Jake Tapper

The book chronicles an unlikely campaign that had an even more improbable ending: the closest outcome in history and an unprecedented eight-month recount saga. Al Franken, Giant of the Senate is about what happens when the nation’s foremost progressive satirist gets a chance to serve in the U.S. Senate and turns out to be good at it. It’s a book about our deeply polarized, occasionally inspiring political culture, written from inside the belly of the beast. Senator Franken takes readers on the campaign trail, inside the halls of Congress, and behind the scenes of some of the most dramatic and hilarious moments of his career in politics.

Before running for the Senate—first elected in 2008 and re-elected in 2014—Franken spent 37 years as a comedy writer, author, and radio talk show host and has taken part in seven USO tours, visiting our troops overseas in Germany, Bosnia, Kosovo, Uzbekistan, Iraq, Afghanistan, and Kuwait.