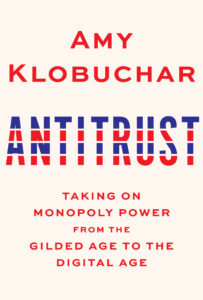 In Conversation with Kara Swisher

This event, originally scheduled for May 11th, will now be held on Monday, May 10th. All tickets purchased for the May 11th date will be honored on May 10th. With questions, please contact [email protected].

In Antitrust: Taking on Monopoly Power from the Gilded Age to the Digital Age, the senior senator from Minnesota and former candidate for president of the U.S. presents the history of antitrust in America and the way forward to protect all Americans from the dangers of curtailed competition, and from vast information gathering, through monopolies.

She begins with the Gilded Age (1870s-1900), when builders of fortunes and rapacious robber barons such as J.P. Morgan, John Rockefeller, and Cornelius Vanderbilt were reaping vast fortunes as industrialization swept across the American landscape, with the rich getting vastly richer and the poor, poorer. Sen. Klobuchar explores today’s Big Pharma and its price-gouging, as well as tech, television, content, and agriculture communities and how a marketplace with few players, or one in which one company dominates distribution, can hurt consumer prices and stifle innovation.

As the ranking member of the Senate Judiciary Subcommittee on Antitrust, Competition Policy, and Consumer Rights, Sen. Klobuchar is at work on issues raised by giant tech companies, such as Facebook, Google, and Amazon, and puts forth her plans, ideas, and legislative proposals designed to strengthen the antitrust laws and antitrust enforcement. Sen. Klobuchar will be in conversation with Kara Swisher, the host of “Sway,” a new podcast about power by New York Times “Opinion,” as well as editor-at-large at New York Media and host of the “Pivot” podcast.