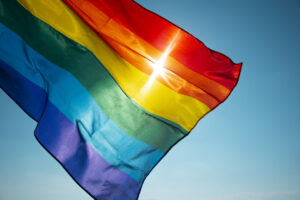 Sexuality and Gender Identity in Judaism

This two-part series comes from Sixth & I’s LGBTQIA Collective, which exists to create a safe space and stronger community of LGBTQIA Jews. To learn more and join the Collective, sign up here.

While much progress has been made in the Jewish world regarding the attitude toward and inclusion of queer Jews, we nevertheless are the inheritors of a tradition that is explicitly and painfully anti-gay.  Rabbi Aaron leads an exploration of some of the ways modern rabbis and scholars have addressed these troubling texts.

Monday, March 1: Beyond the Binary: Gender Identity in Jewish Texts

Many Jewish texts uphold the gender binary and traditional gender norms, but there are some key texts that subvert these ideas. In many instances, the rabbis acknowledge reality doesn’t always fit into binary divisions. Together with Rabbi Aaron, we’ll look at Jewish sources that deal with questions related to gender fluidity.