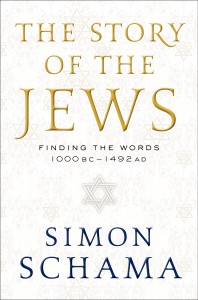 Schama, a historian and New York Times bestselling author, has a monumental new book—a chronicle of the 3000-year history of the Jewish people, told in two volumes and in a five-part television documentary airing on BBC and PBS.

With the lavishly illustrated first volume, The Story of the Jews: Finding the Words 1000 BC – 1492 AD., Schama takes readers from the time when scholars begin to talk about the Jews as a unified people and religious community to the traumatic moment of their expulsion from Spain.

The wide-ranging narrative explores Jews living as integral parts of four civilizations: the ancient Near East, the Hellenistic and Roman world, medieval Christianity, and Islam. Schama explores often overlooked elements like the origin of Judaism in both Hellenic and pagan practices, and the longstanding culture of Arab Jews. From London in the Middle Ages to the synagogues of Spain, he challenges stereotypes and recreates a story of heroism in everyday life as much as one of grand tragedies.