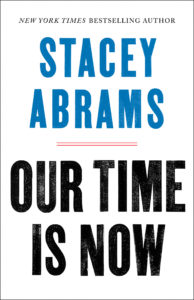 In Conversation with Errin Haines

National leader and bestselling author Stacey Abrams offers a blueprint to end voter suppression, empower citizens, and take back our country in Our Time Is Now: Power, Purpose, and the Fight for a Fair America. A recognized expert on fair voting and civic engagement, Abrams chronicles a chilling account of how the right to vote and the principle of democracy have been and continue to be under attack.

Abrams, who ran as the Democratic nominee for governor in Georgia in 2018, would have been the first African American woman governor in American history if elected. Abrams has not conceded the race marked by wide-spread concerns over systematic voter suppression. The book makes the case for robust voter protections, an elevation of identity politics, engagement in the census, and a return to moral international leadership.

Our Time Is Now draws on extensive research from national organizations and renowned scholars, as well as anecdotes from Abrams’ life and others who have fought throughout our country’s history for the power to be heard. She offers concrete solutions and inspiration to stand up for who we are—now. In conversation with Errin Haines, an award-winning journalist and editor-at-large for The 19th. She was previously the national writer on race for The Associated Press, focused on the intersection of race, politics, and culture.