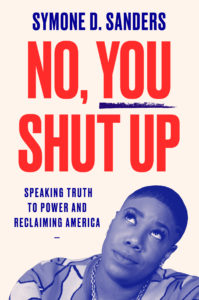 In Conversation with Anna Palmer

As one of the most influential millennial political consultants and activists—and current senior advisor for former Vice President Joe Biden’s 2020 presidential campaign—Symone Sanders has a take-no-prisoners approach to bringing about much needed change. In her rousing call to leadership, No, You Shut Up: Speaking Truth to Power and Reclaiming America, she rallies the young and the young at heart to take on established practices by finding their authentic voice and using it to both fight ideological battles more effectively and to resist those who try to silence them.

In her spirited and unabashedly frank book, Sanders leads a new generation beyond the ballot box to explain how they can fight oppression, injustice, and inequality everywhere—in government, in the workplace, and in every corner of our cultural landscape. Inspiring readers to become powerful instruments of change, she draws on her personal experience as well as historical realities, assembling a new toolbox for a new way forward. The moment is now, and Sanders says, “We need to speak up, not shut up.”

Sanders, who also serves as principal of the 360 Group LLC, is a former CNN political commentator and was the youngest National Press Secretary in U.S. history for Sen. Bernie Sanders’ 2016 presidential campaign. In conversation with Anna Palmer, a senior Washington correspondent for POLITICO, co-author of the New York Times bestseller The Hill to Die On, and editorial director of Women Rule, a POLITICO platform dedicated to expanding leadership opportunities for women at all stages of their career.