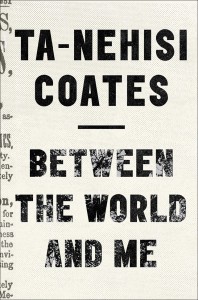 In Conversation with James Bennet

*This program does not include a book signing. All books will be pre-signed by Coates.

Sanford, FL. Ferguson, MO. North Charleston, SC. Baltimore, MD. Charleston, SC.  These cities have become synonymous with a movement that is demanding a fresh confrontation with this country’s history and ideals. That confrontation is ultimately about the status of the black body. What is it like to inhabit such a body and find a way to live within it? And how can we reckon with our country’s fraught history?

Between the World and Me is Ta-Nehisi Coates’s attempt to answer those questions, presented in the form of a letter to his adolescent son. Coates, who grew up in West Baltimore, shares the story of his own awakening to the truth about history and his place in the world through a series of revelatory experiences.

Taken together, these stories map a winding path toward a kind of liberation—a journey from fear and confusion to a full and honest understanding of this country, this world, and how we can all get free. Taking its title from a Richard Wright poem, this book is a heartfelt meditation on identity, racism, and the American Dream.

An educator and long-time journalist, Coates is currently a national correspondent at The Atlantic, where his work has won accolades including the George Polk Award for his cover story, “The Case for Reparations.” In conversation with Atlantic president and editor in chief James Bennet.