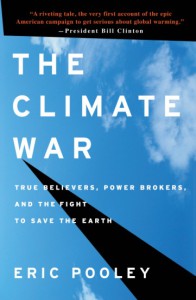 A View From the Trenches

The great American argument over global warming continues to rage on Capitol Hill and beyond. In The Climate War: True Believers, Power Brokers, and the Fight to Save the Earth, award-winning journalist Eric Pooley describes the political and economic battle surrounding climate change legislation, offering a revealing look at the power players who are working to either make or break transformative energy policy.

In a rare panel discussion, Pooley interviews key players of the Environmental Defense Fund’s National Climate Campaign, the most passionate advocates for a mandatory declining cap on carbon emissions. These unsung heroes from the trenches of the Climate War include Steve Cochran, Director; Tony Kreindler, Media Director; Melissa Carey, Climate Change Policy Specialist; and Mark MacLeod, Director of Special Projects. Together, they will lead a tour of the climate battleground, from the backrooms of Capitol Hill to the corporate C-suites to the West Wing of the Obama White House.