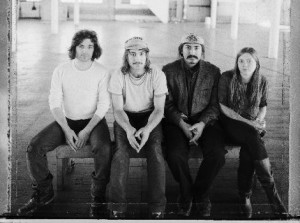 with Bobby and Daniel Lefkowitz

The Low Anthem’s unique brand of Americana makes room for gospel, folk, and blues. Ben Knox Miller and Jeff Prystowsky formed the group in 2006, drawing upon their background as classical composers to help mold the eclectic music. Jocie Adams joined one year later, and the Low Anthem began widening their arsenal of instruments, utilizing everything from World War I pump organs to crotales in the process. After making their independent debut with 2007’s What the Crow Brings, the band rang in 2008 with Oh My God, Charlie Darwin, an album recorded on a remote location 12 miles off the Rhode Island coast. The stark, serene environment proved to be appropriate for the music.