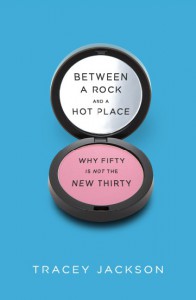 Tracey Jackson found herself bombarded—at the gym, at parties, in conversations with friends—by the catchphrase, “Fifty is the new thirty.” The new aphorism had bloomed out of a collective sense of denial, masking the true fears of a generation unwilling to relinquish their youth.

In Between a Rock and a Hot Place, Jackson skewers the myth with a hilarious and practical appraisal of what middle age really means today. She confronts the truth about death, work, and sex, using stories from her life. She examines the changing roles of motherhood and wifehood; the necessity of planning a “career after your career”; the reality of aging bodies; and the generational shift in our perception of age.

Jackson is a screenwriter, with credits including Confessions of a Shopaholic and the documentary Lucky Ducks. She will be interviewed by Sally Quinn, co-moderator of On Faith for The Washington Post. Book signing to follow.