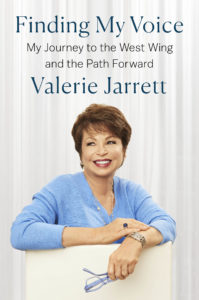 In Conversation with Anita Dunn

In Finding My Voice: My Journey to the West Wing and the Path Forward, the longest-serving senior advisor in the Obama White House shares her journey as a daughter, mother, lawyer, business leader, public servant, and leader in government at a historic moment in American history.

When Jarrett interviewed a promising young lawyer named Michelle Robinson in 1991 for a job in Chicago city government, neither knew that it was the first step on a path that would lead to the White House, where Jarrett oversaw the Offices of Public Engagement and Intergovernmental Affairs and chaired the White House Council on Women and Girls.

From her work advancing civil rights, reforming the criminal justice system, and improving the lives of working families to the stories behind some of the most stirring moments of the Obama presidency, Jarrett—named one of TIME’s “100 Most Influential People”—shares her perspective on the importance of leadership and the responsibilities of citizenship in the twenty-first century.

Jarrett is currently a senior adviser to the Obama Foundation and a senior distinguished fellow at the University of Chicago Law School. In conversation with Anita Dunn, the former White House communications director and senior adviser to President Obama’s presidential campaigns and currently the managing director at SKDKnickerbocker. Book signing to follow.