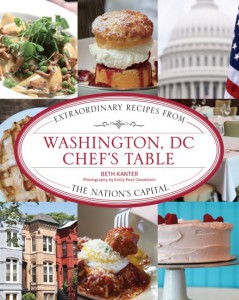 In DC, political rivals disagree on just about everything, but there is widespread bi-partisan support for our city’s restaurant scene. The nation’s capital and neighboring suburbs boast premier restaurants and inspired chefs who bring even the most hardened adversaries to the table.

Washington, DC Chef’s Table, a new cookbook by Beth Kanter with photography by Emily Pearl Goodstein, celebrates the best tastes Washington has to offer with mouth-watering recipes from more than 50 of the capital’s most talented chefs.

At what promises to be a tasteful event, Beth and Emily will be joined by some of the featured chefs to dish on our city’s restaurant scene and Jewish cooking, including Adam Bernbach, Bar Manager at Proof; Daniel Bortnick, Executive Chef at Firefly; and Elizabeth Hutter, Executive Pastry Chef at Sunflower Bakery.