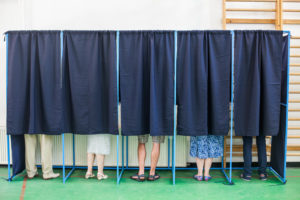 With midterm elections on the horizon, this conversation will explore wide-ranging experiences and perspectives on campaign work in a bipartisan discussion moderated by Mo Elleithee, the founding executive director of Georgetown University’s Institute of Politics and Public Service.

Panelists will share lessons gained from local and national campaign work. They include:

Prior to his role at the Institute, Elleithee was the communications director for the Democratic National Committee and served as senior spokesman and traveling press secretary for Hillary Clilnton’s 2008 campaign.

This program is presented in partnership with Georgetown University’s Institute of Politics and Public Service. Launched in 2015, the Institute is the first of its kind in DC and is dedicated to reconnecting young people with the notion that politics is a noble vehicle for public service and prepares them to become the next generation of leaders.