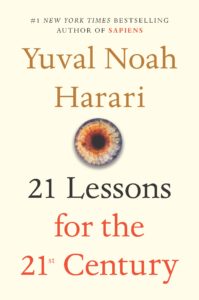 In Conversation with Jonathan Capehart

In Sapiens, bestselling author Yuval Noah Harari explored the past. In Homo Deus, he looked to the future. Now, he turns to the present to make sense of today’s most pressing issues in 21 Lessons for the 21st Century.

Religion, terrorism, war, politics, fake news, human migration, the environment, nationalism—Harari builds on the ideas explored in his previous books for a probing investigation into the big subjects we confront on a daily basis in the media and in our lives.

As technology advances faster than our understanding of it, hacking becomes a tactic of war, and the world feels more polarized than ever. Harari addresses the challenge of navigating life in the face of constant and disorienting change and raises the important questions we need to ask ourselves in order to survive.

From envisioning what the future of the workforce will look like to dealing with the threat of terrorism and examining why liberal democracy is in crisis, 21 Lessons for the 21st Century offers advice on how to prepare for a very different future from the world we live in now.

Harari is a professor of history at the Hebrew University of Jerusalem and has written for publications including The Guardian, Financial Times, and The Wall Street Journal. In conversation with Jonathan Capehart, a Pulitzer Prize-winning journalist, member of The Washington Post editorial board, host of the “Cape Up” podcast, and MSNBC contributor.