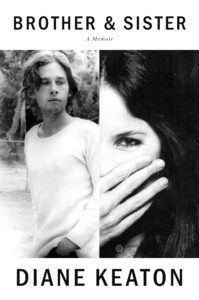 In Conversation with Heather Moran

When they were children in the suburbs of Los Angeles in the 1950s, Diane Keaton and her younger brother Randy were best friends, sharing stories at night in their bunk beds. But, as they grew up, Randy became troubled, then reclusive. By the time he reached adulthood, he was divorced, an alcoholic, and couldn’t hold on to full-time work; his life was a world away from his sister’s and the rest of their family.

In Brother & Sister, Keaton delves into the nuances of their past to confront the difficult question of why Randy’s life took such a different course. This is a story about love and responsibility; about our differences and the distances they create; about growing up and growing apart; and about mental illness and alcoholism. Intertwined with photographs, journal entries, letters, and poetry—many of them Randy’s own writing and art—Brother & Sister contemplates the inner workings of families, the ties that hold them together, and the special bond between siblings even when they are pulled far apart.

After making her film debut in 1970, the Academy and Golden Globe Award-winning actress has starred in some of the most memorable movies of the past 50 years. She is the bestselling author of Then Again and Let’s Just Say It Wasn’t Pretty. In conversation with Heather Moran, Sixth & I’s CEO.