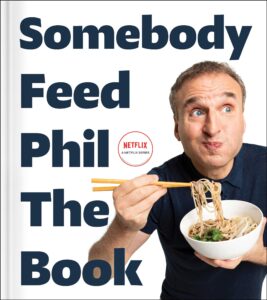 Following the event, those who purchase a book (either with their ticket or on-site at the event) will be eligible to have their photo taken with the author. This opportunity is subject to change based on the state of the pandemic and at our discretion.

Phil Rosenthal, creator of “Everybody Loves Raymond” and host of the beloved, James Beard Award-nominated Netflix series “Somebody Feed Phil,” loves food and learning about global cultures, and he makes sure to bring that passion to every episode of the show. Whether traveling stateside to foodie-favorite cities such as San Francisco or New Orleans or around the world to destinations like Saigon, Mexico City, or Marrakesh, Rosenthal brings his signature humor to every episode—and now to this book.

In Somebody Feed Phil the Book, Rosenthal presents more than sixty of viewers’ most requested recipes from acclaimed international chefs and local legends alike and shares never-before-heard stories from every episode of the first four seasons of the series. Recipes include Michael Solomonov’s duck stew (featured in the Tel Aviv episode), Paul Toussaint’s rhum sour cocktail (featured in the Montreal episode), Alice Waters’ fresh peach crisp or cobbler (featured in the San Francisco episode), and many more.

The books also includes “scripts” from some of Rosenthal’s video phone calls from the road with his family, making this the ultimate companion guide for avid fans of the show as well as armchair travelers and adventurous at-home chefs.